Where we going fellas?

A long time ago, when (if you can believe it) The Beatles were struggling young musicians, tired of their lack of luck and playing low-paying gigs around Liverpool, John Lennon would try to buck up his fellow bandmates by asking, in a faux American DJ voice, “Where we going fellas?!” The answer was always “To the toppermost of the poppermost!”

Kane, the “one-man beat group,“ is a multi-talented musician, singer, songwriter, and performer (he’s played with Neil Innes, Joey Molland, and The Bootleg Beatles). He’s adopted the Poppermost name for his own musical project and the first Poppermost release, last year’s“ Can’t Take That Away” single, was a fab-tastic Mersey beat romp.

The A Piece of the Poppermost EP (Bandcamp) shows Kane lovingly mining the musical vein of other mid-Sixties groups. 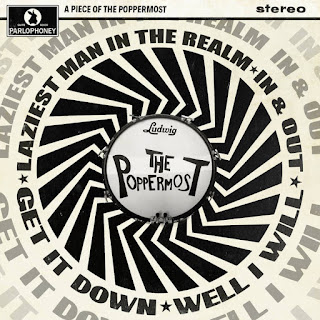 “Well I Will” could have been recorded by The Easybeats and “Laziest Fella in the Realm” is a jaunty, Kinks-flavored tune like “Dedicated Follower of Fashion.” “Get it Down,” with its McCartney vibe, is a cross between “I’ll Follow the Sun” and the songs he wrote for Peter and Gordon. And “In & Out” is the kind of feel-good song favored by Herman’s Hermits and might still become a pub sing-along
In addition to the “Can’t Take That Away” single and the A Piece Of The Poppermost EP, Kane has recorded eight more songs that a scheduled to be released on his Hits To Spare album in June. It’s available on vinyl and because the CD of A Piece Of The Poppermost has already sold out it might be a good idea to pre-order it.
Next Time: Jeremy Porter’s Sweet Tooth
on May 04, 2021

Pure Pop For Now People
I'm a very picky musical appreciator who likes to listen and write about new music.

Where we going fellas?